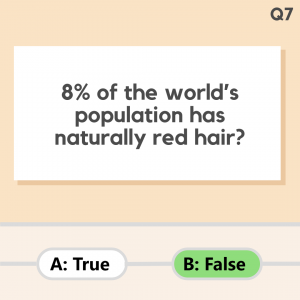 This number is even lower, only 1-2% of the whole world population has naturally red hair!
And worldwide, only 1 in 100 people are redheads.


The color of the hair is influenced by the gene MC1R also known as melanocortin-1 receptor. In its normal form the gene will stimulate the production of brown/black pigment eumelanin, which ensures dark hair. However in redheads, less eumelanin is produced and more of the red pigment pheomelanin. The ratio of these two determines the exact hair color that will be produced.

The most common natural hair color in the world is black followed by brown, blond and red.


-Sources that we used –

Frequently trimming your hair will make it grow faster?